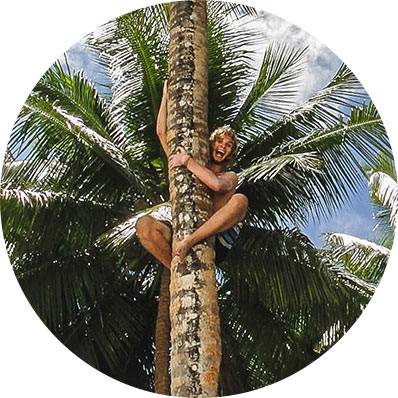 1986: my name is janne koivistoinen

I was born in a small factory city in Eastern Finland called Varkaus. My father was a car spare parts seller and my mother is a kindergarten teacher. It was early November, so I had to get used to the extreme winter conditions from the Day 1.

By the age of four I was convinced I was meant to be a football player, “el portero” – the goalkeeper. I used to carry a rugged little ball with me all the time wherever I went, as all five year-olds did in my neighborhood. Football was my first true passion.

One day we went to visit my godfather, who was a computer sales person, in the city of Mikkeli. That was the first time I saw a device what would change my life. It was running on Windows 3.0 and the year was 1992. How mind-blown can a six-year-old be? Enough so that when my parents finally bought a computer in 1993, they set it up in my tiny room. That changed everything.

Years went by and I grew up playing football during the summers and snowboarding during the winters. Having no Internet, I explored every folder and panel in Windows 95, just to see if there was anything interesting I might have missed. I knew MS-DOS by heart and used it to launch Heroes of Might and Magic II daily.

After the turn of the millennium I got introduced to the world of Hip-hop. School had to compete for my attention with not only snowboarding and football, but also with breakdancing and now graffiti. My first taste of the internet was downloading beats from Napster via a 56k modem… kids of today never get to experience that sweet soundtrack of a dial-up connection.

I never was much of a breakdancer – though I can still throw down a windmill anytime – but for a 15-year-old graffiti artist, I wasn’t bad. Trying to find harmony between unique letters and styles was fascinating. In fact, it was my rebel years which eventually led me to the world of Graphic Design.

First there was PaintShop Pro 7, Photoshop 6.0 seemed too complex. The year was 2001. I went through all the menus and filters in PSP and created “graffiti inspired art-work” posting it to online galleries like DeviantArt. I eventually turned to Photoshop and the web, teaching myself how to design and code websites. My first personal website, screenshot, came in early 2003.

I was never motivated to try hard in school, but I never had trouble with it. In high school my lack of motivation brought headaches for my parents. I still wanted to be a pro snowboarder, so I ended up spending my days at the local hill instead of studying Swedish. I dropped out during my first year. A few weeks later I broke a few bones snowboarding. Karma.

I pursued my design and website skills even more after dropping out in spring 2004. I was able to sell a website for a local bowling alley for 100 euros. I designed and developed the site with a cast in my primary hand. 9 years later, I still manage their site and advertising. During that project, I decided to apply for an Audiovisual Communication degree. I got in. I had a direction in life again and moved in to my own apartment. I kept doing some work on the side during my studies and I was good at what I did.

I spent the summer of 2006 working on Kuopio Rockcock‘s visual identity, website, mascots, print ads, festival banners, belts, t-shirts, passes, and everything you can imagine, like condoms. People noticed. Suddenly, I was giving interviews for newspapers and radio stations. I was 19-years-old. I continued my work with the festival in 2007.

The beginning of my third year of studies was an internship period. The small city of Varkaus wasn’t exactly full of interesting internships. I got a little frustrated and the following week I started my own company. My next move was to hire one of my best friend and my classmate, Miikka, as an intern. Our teacher loved it. I ended up getting a decent amount of work. As a result, I had to learn new things before we got to them in school. Eventually it got to the point where I was spending less time at school, and more time at home working. I was so excited to work with real clients, that I decided to focus on my business 100%.

In 2008 I moved to Jyväskylä, a youthful university city in Middle Finland. One day I found ThemeForest, a designer oriented online marketplace to buy and sell website designs and themes. I created a little bit of passive income, but more importantly, I developed good connections and it led to more projects internationally. Getting more recognition internationally also landed freelance relationships with Finnish agencies. That winter I designed 6 websites for different cities in Finland.

Life in Jyväskylä didn’t last long; I caught a very serious travel bug. For years I had dreamt of backpacking in remote locations, and I decided now was the time. Sometimes when your mind’s made up, there’s just no turning back. I gave away all my belongings and completed all my open businesses. Three weeks later, I landed alone in Barcelona with 163.50 euros, a backpack full of clothes, and a laptop. No itineraries nor expiration dates.

I could write a book of my adventures and what I experienced during my travels. Dancing with tribes in Ethiopia, swimming with jellyfishes in Indonesia, hiking the world’s most dangerous path in Spain, practicing black magic in the Philippines, searching for perfect waves in the Caribbean and escaping avalanches in Alaska. I’ll save all those stories and more for later.

After thousands of banana shakes, dozens of countries, hundreds of friends and multiple sunburns a changed man returned to the Helsinki-Vantaa’s Airport. That old MacBook Pro I packed 963 days earlier in Jyväskylä gave me an opportunity to be completely location independent and travel around the world. I continued working remotely with clients like World Vision and Nokia. With my hard work, determination and self-discipline – it worked out well.

Currently, I’m enjoying life as a freelance Graphic Designer, as a Snowboarder, as a Surfer and as a World Traveller. I’m living in the beautiful city of Helsinki and I travel over half of the year. What comes to my career in the Graphic Design world – I still explore every panel and point of view, just to see if I missed anything. I also know that my best work and greatest adventures are still ahead of me.

High fives & Thank You for reading.